Things Are Getting Worse in Massachusetts 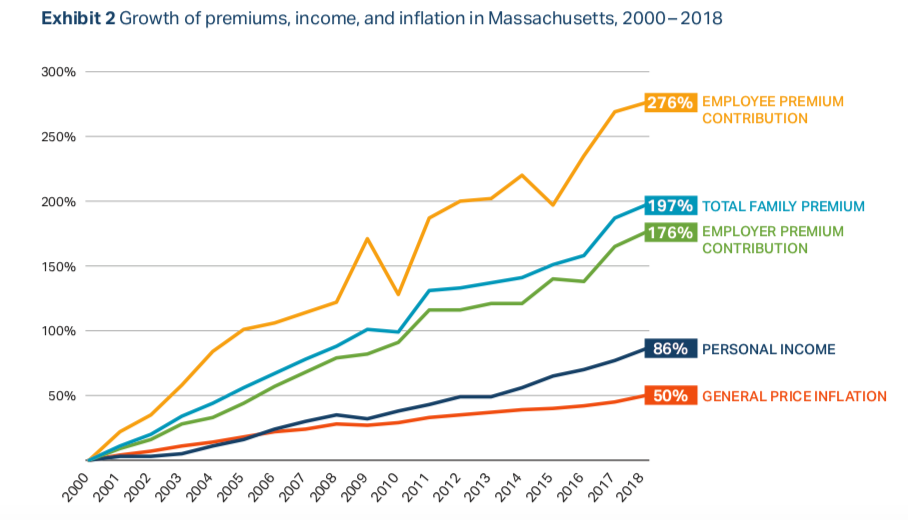 Few states have done as much as Massachusetts (MA) over the last 30 years to lower healthcare costs, improve quality and outcomes and, in general, to innovate.

Last week the MA Health Policy Commission issued its 2019 Annual Health Care Cost Trends Report documenting wins, losses, and opportunities for change. Romney Care was passed in 2006 and, in 2012, the state passed a sweeping initiative to focus on a healthcare growth target and transparent metrics for evaluating healthcare performance statewide.

Despite significant initiatives, the state reports slippage in many metrics, including burdensome cost increases for employers and their employees.

The report points to issues that now vex healthcare policy makers in every state, including medical debt burden, unaffordable premiums and cost shift to employees through plan design and premium share.

Further, the report calls for employers to get off the sidelines and to actively “work collaboratively toward [making the marketplace] a more high value system.“ Massachusetts provides some of the best healthcare at close to the highest costs in the nation.

In MA, six hospital systems dominate the market. Quality and cost of care are MA’s biggest challenges, just as they are nationwide. Some fascinating statistics:

Who pays for all this? Employers and their employees bear much of the burden for these increased costs. Other key findings from the report:


Employees are bearing the burden for increased costs, and are increasingly unable to pay for necessary medical services. This isn’t a promising trajectory.

Perhaps one of the most disconcerting findings in the report relates to Alternative Payment Methods (APMs) and provider risk arrangements. The report has an excellent accompanying chartpak that looks at these. In areas that feature many contracted providers utilizing upside/downside risk arrangements, employers generally benefit. These arrangements often protect the employer and employees from costs borne by providers (complications and infections) as part of the arrangement.

Other takeaways from the report:

So, in the face of apparent slippage, who does the state want to become more involved? As part of the 2019 Summary Policy Recommendations in the report there is a very clear recommendation for employer engagement and consumer choice. This recommendation appears repeatedly in the report, and is a call to arms, so to speak, for the Massachusetts business community:

“Employer Engagement and Consumer Choice. The Massachusetts business community should increase its coordinated engagement to drive changes in health care. Employers should collaborate with payers, providers, and other stakeholders to influence changes in spending and affordability, care delivery, and the promotion of a value-based market.”

The recommendation goes on to suggest the promotion of “two sided contracts.”

Massachusetts policymakers and others have worked hard over a thirty year period to push for healthcare innovation, access and accountability.

Massachusetts boasts the lowest rate of uninsured residents in the US. At the same time, MA also experiences many of the same problems that plague other states. Employers and employees continue to bear the burden for ever increasing hospital and drug costs, and progress with APMs has apparently stalled or reversed.

Will employers seize the day and demand change? Will benefits brokers and consultants finally be held responsible by employers in favor of value-based arrangements that are fair to providers but also fair to patients and purchasers?

The payer marketplace in MA has been slow to offer transparency and shared savings products to employers and many benefits advisers have continued to favor the status quo. Perhaps the findings of this new report will inspire active change and an employer movement toward value.

Jeffrey Hogan is a healthcare thought leader and regularly appears on national and local forums focused on moving to value based healthcare and is actively working to promote healthcare transparency.